Ciye Cho has been dreaming of the universe of Orberana for a very long time. Ever since he was a child, Ciye has had a passion for creating fantasy worlds and characters, from stories of eccentric adventurers to wisecracking trees. 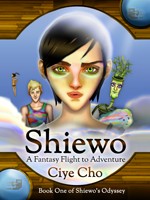 Shiewo is a young-adult fantasy novel about a sky captain’s quest to find a Wishing Fish. Set in the universe of Orberana, it is a tale of talking clouds, clockwork bureaucrats, and a flying ship powered by music. Inspired by the oddness of Alice In Wonderland, the subversiveness of Roald Dahl, and the epic journey of The Wizard of Oz, Shiewo is both familiar and unique: a modern imagining of our age-old quest for something more from life.

“I believe we’re all adventurers deep down,’ says Ciye. “It is my hope that Shiewo will become a book that will encourage readers of all ages to persevere in the search for their own Wishing Fish.”

Accompanied by an original soundtrack and a website of interactive illustrations, Shiewo is more than just a book: it is a new kind of storytelling experience. Readers can visit Shiewo: The Interactive Explorer to examine a virtual cutaway of a flying ship or read profiles of the characters. They can also download the soundtrack, Flight Song 1, and hear replicas of ‘flight songs’ that are featured in the book. “Images, writing, music… they’re all just different forms of storytelling,” says Ciye. “And what I wanted was to tell an immersive story.” 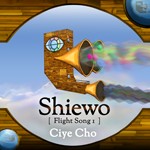 Flight Song 1 is not an old-fashioned soundtrack. From the piano ballad of Theo to the madcap electro of The Odyssey, Flight Song 1 is a crazed mix of styles and sounds. “I use elements of dance, electro, pop, and experimental music on the record, but I don’t think that distinctions matter,” says Ciye. A work of ‘odd pop’, Flight Song 1 draws inspiration from everything from Steve Reich to Röyksopp, Björk to Phillip Glass—and even the imaginary works of the composer-captain Shiewo Morose.

Like the intrepid Captain Shiewo, Ciye Cho is ready for anything.

Ciye lives in Australia, and works as a freelance graphic designer.